MADIKERI: In April this year, retired Deputy Director-General of Geological Survey of India (GSI), Dr. H.S.M. Prakash had predicted that the devastating natural calamity that rocked Kodagu and Kerala last year will haunt these regions again this year.

Dr. Prakash emphasises that he is not proud his predictions came true but hopes we can work towards mitigating the impact of landslides.

Underscoring the importance of studying the phenomenon, in an exclusive email interview with Kodagu Connect, Dr. Prakash urges weathermen to become climate scientists and analyse paleoclimate in particular to understand the whole gamut of events all over the globe.

Here are the excerpts of the interview.

END_OF_DOCUMENT_TOKEN_TO_BE_REPLACED

Unstable coffee market, low prices for black pepper, floods, pending rehabilitation of 2018 landslide victims… people of Kodagu have been going through a harrowing time for the last few years and all that was required from the Yediyurappa government was an assurance saying ‘we are with you’ during the cabinet expansion yesterday. Unfortunately, by not giving any ministerial representation to Kodagu, the new state government has dealt a blow to the aspirations of the people of the district.

Kodagu has been a stronghold of BJP for the last few decades. While Madikeri MLA Appachu Ranjan has been a legislator for five terms, for Virajpet MLA K G Bopaiah this is the fourth term. So, when the Yediyurappa cabinet was expanded yesterday it came as a surprise to the people of Kodagu that none of its two MLAs were made ministers.

END_OF_DOCUMENT_TOKEN_TO_BE_REPLACED

Click on the below links for details of sub-committees and mobile phone numbers of officers. MADIKERI: Other than causing huge loss in terms of infrastructure, property and crops, the recent floods and landslides in Kodagu have led to indirect losses that are long-term and complex. For example, these landslides have brought significant sediment load in the drainage channels and connected water reservoirs

One such impacted reservoir is the Harangi dam, which is located close to the northern affected areas near Kushalnagar. Using pre-landslides and post-landslide open source satellite images and advanced GIS image processing, WRI India generated map showing Total Suspended Solid (TSS) concentration within the Harangi reservoir has increased by almost 100 times due to flow of increased load of soil and sediment within the reservoir. It is believed such high load of soil and sediment inflow causes sedimentation within the reservoir and thereby significantly reduces the water holding capacity of the dam.

Silting is a natural hydrological and sedimentological process in which sediments flowing from the upstream catchment area get deposited in the reservoir.

END_OF_DOCUMENT_TOKEN_TO_BE_REPLACED 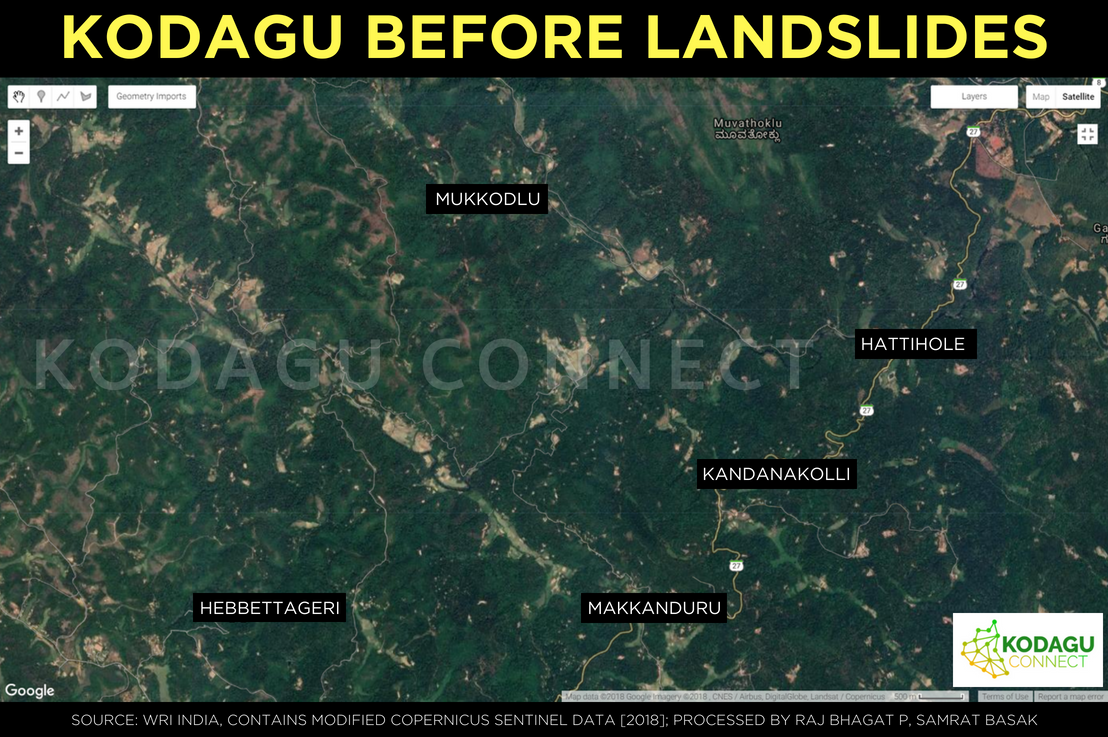 MADIKERI: A month after Kodagu was devastated by unprecedented floods and landslides, questions are being asked about what could have led to the worst natural disaster to strike the tiny district in Karnataka in decades.

While rampant deforestation in the name of tourism has been blamed primarily for the tragedy, experts state there are other reasons that could have contributed to the calamity.

In this article, we look at some of the possible causes that led to the widespread disaster.

END_OF_DOCUMENT_TOKEN_TO_BE_REPLACED

When humans originated on this planet, their demands were confined to food, shelter and clothes. As the time passed, demands of humans increased manifold. Today, in this modern era, or to put it more meaningfully, in this consumerist world, his demands have skyrocketed.
In the 18th century, industrialisation was triggered in England and soon it spread across other European countries. In the early 19th century, industrialisation spread to Asia, South America and Australia. If we confine our discussion only to the Indian context, industrialisation gained pace after independence. Industries need basic infrastructure like uninterrupted power supply, all-season roads, good communication facilities, railway connectivity, airports, seaports, and inland water ways among many others.